The Company pays a new record dividend of more than 11.4 million euros.

At the close of the first semester 2009, HISPASAT reports net profit of 29.5 million euros, a 55.0 percent increase over the same period last year. The improvement in HISPASAT´s results is mainly due to a boost in revenue and in maintaining an efficient structure, tailored to current circumstances and compatible with the projects underway.

As a result of this, consolidated EBITDA as of 30 June 2009 was 60.4 million euros. This amount represents an improvement of 8.0 percent, with respect to that obtained in the same period in 2008. EBITDA margin at the close of the first semester was 80 percent. 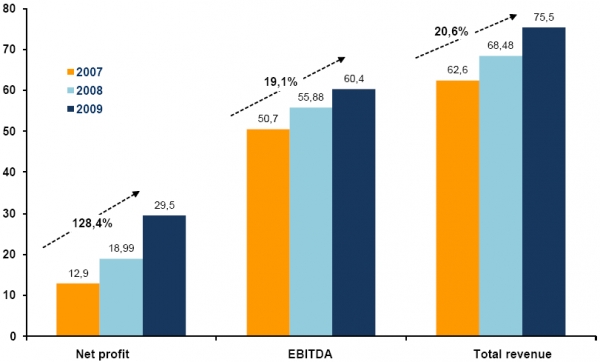 The results for 2008, and the solidity of the foundation upon which the Group´s growth is built for coming years, has allowed HISPASAT to pay an historic dividend of more than 11.4 million euros. This amount, an increase of 28.1 percent over the payout for the previous fiscal year, allows maintaining a highly profitable dividend and having the necessary resources available to continue with the investment process included in its Growth Plan which will double its space capacity and will strengthen its competitive position in its target markets.