The terminals installed in Magaña, winner of the #enREDatupueblo contest, are now ready for operation

In this interview, Jorge Rodríguez, Marketing Manager at Hispasat, talks about the development of this contest and the rest of the Conéctate project, aimed at boosting satellite broadband solutions in Spain. 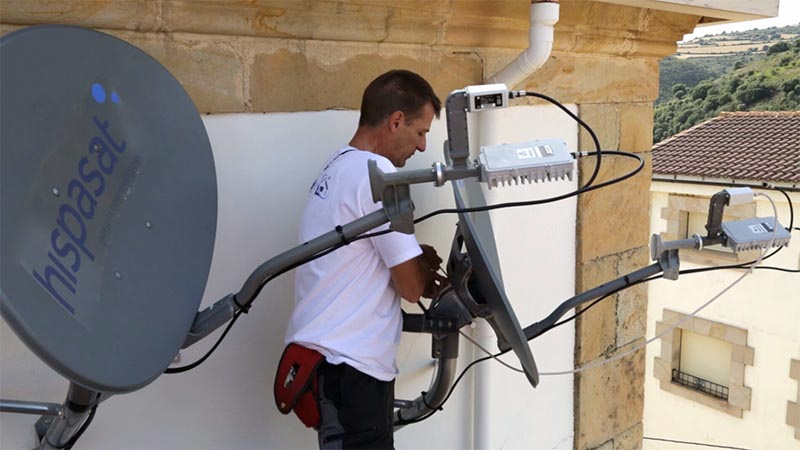 HISPASAT launched Conéctate during the first half of 2017 as a digital inclusion project aimed at improving the quality of life and the economic and social development of remote or sparsely populated areas in Spain that do not have access to broadband Internet or have very poor quality access. The key element of CONÉCTATE is #enREDatupueblo, a contest that has recently awarded the municipality of Magaña, in the province of Soria, with a year of free satellite Internet services. We discussed all of this with Jorge Rodríguez, Marketing Manager at Hispasat.

How did the CONÉCTATE project come about?

Although Spain leads Europe in the implementation of fibre optics in large urban communities, it is certainly true that there are still areas where, due to geographical location or low population density, this infrastructure is not the most appropriate. This problem could quickly be resolved through satellite technology, which offers conditions of quality and price comparable to those of terrestrial networks. Thus, satellites are an ideal complement for bringing broadband connectivity to areas that other technologies do not reach. Indeed, we have devised the CONÉCTATE project in order to grant greater visibility to this solution.

What are the core principles of the project?

First of all, contributing to the reduction of the digital divide that affects people living in remote or sparsely populated regions of the Spanish territory. This will be achieved, in part, thanks to the second principle, which is none other than disseminating and making known the satellite connectivity solution to the general public, making them aware of the advantages it provides in those areas that lack terrestrial connectivity or have very poor connection quality. The project also seeks to explore possible synergies and promote public and private collaboration opportunities in order to raise awareness, provide solutions in terms of Digital Agenda and publicise the opportunity this initiative could represent for citizens and municipalities that are affected by this problem. Finally, with the CONÉCTATE project we also intend to increase our own knowledge on how Spanish society views satellite connectivity.

Let us now turn to the star activity of CONÉCTATE: #enREDatupueblo.

In order to grant CONÉCTATE more visibility at all levels, we launched a contest called #enREDatupueblo through which HISPASAT offered a currently digitally isolated Spanish municipality the opportunity to enjoy satellite connectivity for one year, completely free of charge, for all of its residents and homes. We did not only offer the service but also the installation and tuning of antennas, thanks to the support of Eurona and Quantis, its satellite subsidiary. The winning municipality was Magaña, a small town in the province of Soria, Castilla León. A few days ago, the installers completed the installation of 43 antennas in Magaña, Pobar and Villarraso, which form part of the municipality, in order to provide satellite Internet services to residents and public institutions, such as the Town Hall and the health centre, as well as some of the businesses established in the municipality. As a complement to these terminals for private use, four open access Wi-Fi points have also been installed: two in Magaña, one in Pobar and one in Villarraso, thus covering all the population centres that make up the municipality.