HISPASAT bids farewell to two of its most emblematic satellites

Amazonas 1 was the first satellite located at the 61°West position and together with Hispasat 1C began marketing broadband services in Latin America. 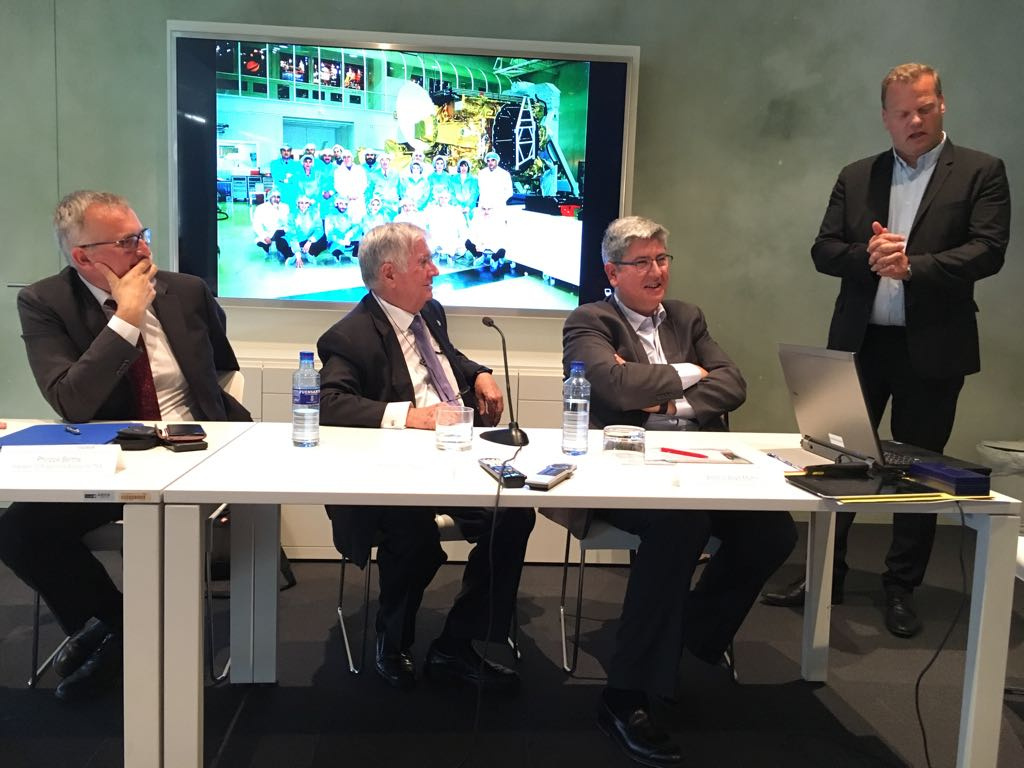 The Hispasat 1C satellite (H1C, subsequently called H30W-3 and H84W-1, due to the two orbital positions in which it was located) was permanently sent to the graveyard orbit on 2 June, after a 300 km journey from its last orbital position, which began on 29 May after the transmission of the final command for its total deactivation at 14:18 from the Satellite Control Centre in Arganda del Rey, over an hour behind schedule because it took longer to empty the tanks which carried more fuel than expected.

As for Amazonas 1, it ended its service life on 23 June at 13:56 and was also relocated to the graveyard orbit, as established by the recommendations of the International Telecommunication Union (ITU) and the Inter-Agency Space Debris Coordination Committee for the proper maintenance of the geostationary orbit. The operation was exactly the same as that carried out with Hispasat 1C a few weeks earlier.

In both cases, as small ceremony was held to bid farewell to the two satellites with well-deserved honours. On 2 June, the Hispasat delegation headed by Antonio Abad, Chief Technical and Operations Officer, received representatives of Thales Alenia Space, manufacturers of the H1C satellite and on 23 June, they received the representatives of Airbus, who built Amazonas 1, along with some of the insurers. The former Chief Technical and Operations Officer, Pedro Pintó, who had launched both programs, also attended the two events.

With absolute technical rigour, the Satellite Operations Engineering team coordinated the entire re-orbiting procedure in permanent communication with each of the manufacturers. This was especially necessary in the case of Amazonas 1, since it was the first satellite of its kind to be re-orbited and there was no previous experience, therefore making the intervention of the manufacturer essential in order to successfully develop the process.

These heartfelt actions terminated the activity of both satellites after having provided communications services over many years of useful life.Hispasat 1C provided services for 17 years, two more than initially expected, while Amazonas 1 served for 13 years, despite experiencing fuel leakage shortly after its launch, which had forecast a much shorter lifespan. Overcoming these forecasts reveals that both were robust and reliable satellites and highlights their efficient operation during those years, maximising their expected service life, efficiently managing fuel during the orbital manoeuvres required for the correct operation of the satellites.

The Hispasat 1C satellite, based on the Spacebus B2 platform, had 24 transponders on the Ku-band and its main services included broadcasting television channels both in Europe and in the Americas, as well as providing other telecommunications solutions. Throughout its lifetime, it carried out 22,850 transmissions, more than 1,200 manoeuvres controlled from the ground, and bore witness to 1,544 eclipses of the Earth and 36 of the moon. It was launched on 3 February 2000 from Cape Canaveral, Florida, aboard the ILS Atlas IIAS rocket, and initially located at the 30° West orbital position (H30W-3). In 2014, after an agreement was reached with Star One, the satellite was moved to the 84° West position and renamed Hispasat 84W-1. In 2003, HISPASAT began marketing its broadband services in Latin America with this satellite and these have been used by more than 20 of the operator’s clients in the region. Furthermore, the capacity of Hispasat 1C has been used for distance education, such as in Uruguay’s Plan Ceibal project or the Subtel Programme in Chile, for the MEDNET project for telemedicine in Peru, to connect remote areas of Antarctica in Argentina, and to develop energy, livestock and fishing industries in different areas of the region.

The Amazonas 1 satellite was launched on 5 August 2004 at Baikonur, aboard the ILS Proton M-Breeze M rocket. Built by EADS Astrium, currently Airbus, based on the Eurostar 3000 platform, it was the first satellite located at the Brazilian 61° West orbital position. In 2014, thanks to an agreement with Intelsat, the satellite was relocated to the 55.5° West position and renamed H55W-1. Throughout its lifetime, Amazonas 1 carried out over 25,000 transmissions from 19 different countries, 613 manoeuvres in orbit and bore witness to 1,170 eclipses of the Earth and 29 of the moon. This satellite was the cornerstone of the company's geographic expansion into Latin American markets. With its 32 transponders in KU-band and 19 in C-band, as well as transatlantic and Pan-American capacities, the Amazonas 1 provided coverage for the entire American continent, Europe and North Africa. Its main services included the distribution of television channels and other telecommunications solutions such as corporate networks or broadband applications, among others.