Hispasat launches it most innovative satellite yet: the H36W-1

Today the operator presented the Hispasat 36W-1, which it developed in collaboration with the ESA and which will be put into orbit in January.

Built on the new SmallGEO platform, Hispasat 36W-1 has a regenerative payload which will provide greater flexibility to the satellite.

The new HISPASAT satellite was developed with broad participation from the Spanish space industry, financed through Spain’s contribution to the European Space Agency. 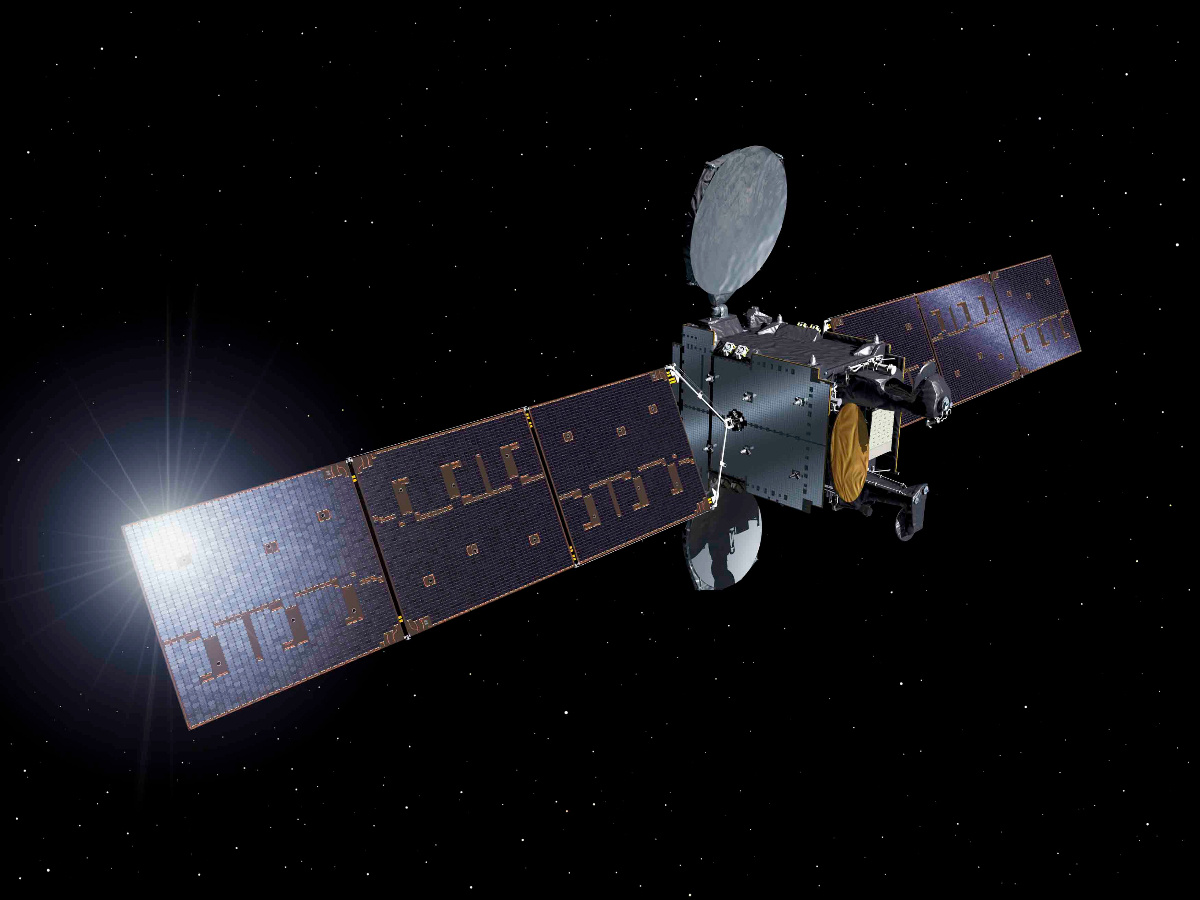 Madrid, 16 January 2017.- Today Spanish satellite and telecommunications operator HISPASAT presented their Hispasat 36W-1 satellite (H36W-1) at their headquarters in Madrid. The satellite will be put into orbit on January 27 using a Soyuz launch vehicle and will be launched from the European Spaceport of Kourou in French Guiana. Elena Pisonero, president of HISPASAT, Juan Carlos Cortés, director of International Programmes at the Centre for the Development of Industrial Technology (CDTI), and Xavier Lobao, head of Future Telecommunications Projects at the European Space Agency (ESA), all attended the presentation.

Hispasat 36W-1, which is currently at Kourou, has 20 Ku-band transponders and additional capacity for up to 3 Ka-band transponders over the Iberian Peninsula and the Canary Islands. It will open the orbital position located at 36º West, providing HISPASAT’s fleet with new and optimised coverage over South America, Europe and the Canary Islands. It is also the first satellite built on the SmallGEO platform, which was jointly developed by the ESA and the German manufacturer OHB System AG. The design of this platform allows for a substantial reduction in the mass of the satellite thanks to the use of electric propulsion throughout its entire useful life, thereby reducing launching costs and meeting the highest requirements for telecommunications services. Moreover, Hispasat 36W-1 features the innovative RedSAT regenerative payload, made up of a processor and an antenna that actively receives reconfigurable beams.

A push for flexibility in orbit

Both elements are combined to provide HISPASAT with greater flexibility for their services. On the one hand, the processor regenerates the signal received to transmit it cleanly and noise-free to Earth, thus meaning that the quality of the signal that reaches our clients is much higher than that which is obtained through traditional satellites. Furthermore, part of the process which is usually done on the ground will be done on board the Hispasat 36W-1, considerably simplifying the structure of the network, allowing the size and power of the user terminals to be optimised and simplifying links that would normally require a double hop, thereby reducing latency and maximising the space segment. The on-board process therefore constitutes a further step in the evolution of satellite communications.

Moreover, the DRA-ELSA (Direct Radiating Array – Electronically Steerable Antenna) used on the satellite allows the beams received to be reoriented, the position of which is electronically controlled from Earth and can be changed at any moment so that the satellite can be adapted to the new needs of clients throughout its entire useful life. Summing up, the use of an innovative payload such as RedSAT improves the quality of the services provided to Hispasat’s clients and will allow the company to adapt to changes in the market.

The new HISPASAT satellite was developed with the broad participation of the Spanish space industry, financed through Spain’s contribution to the European Space Agency. Specifically, the project’s key innovative developments were carried out by Spanish industry: Airbus Defence and Space España built the active ELSA antenna, and Thales Alenia Space España was behind the RedSAT processor. Furthermore, other Spanish companies from the sector participated in providing a variety of systems. 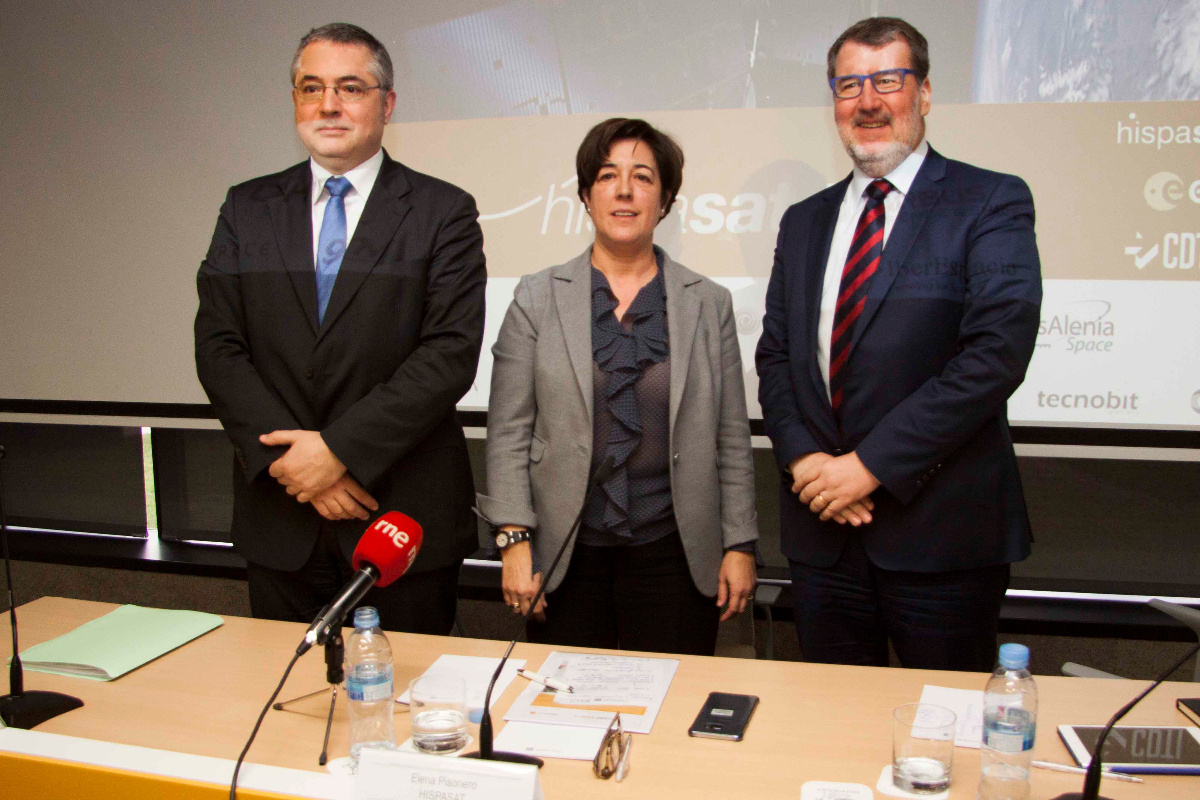 In the words of Elena Pisonero, president of HISPASAT: “With the development of this new satellite, HISPASAT is now at the forefront of initiatives for the use of payloads in innovative communications, through which it will be possible to offer the latest in communications services. We will provide support to our clients in the area of video contribution services, backhaul celular in Latin America and we will also provide more efficient broadband services thanks to the Ka-band capacity incorporated in the satellite”.

According to Juan Carlos Cortés: “The CDTI highly values the important milestone reached through the launch of this satellite and the broad participation of the Spanish industry, led by the driving force of the operator HISPASAT. The government has made a strong investment in this project through the European Space Agency (ESA) in support of the participating companies, which we hope will lead to a higher position for these companies in the value chain, an expansion of their product portfolio and an increase in their exports”.

Xavier Lobao added: “The PPP model, or public–private partnership, implemented by the ESA in the ARTES telecommunications programme maximises the benefits of introducing technological innovation into the area of satellite telecommunications for all participants. On the one hand, it allows the operator’s level of acceptable innovation to be increased by sharing the risks with the public sector. On the other hand, for companies that develop technology, it provides a faster pace at which products can be introduced to the market and facilitates a first in-orbit demonstration and a commercial and operational reference. Lastly, it increases funding for administrative bodies thanks to private co-financing and ensures that technological development meets specific needs and is sufficiently developed to be marketed”.

The Centre for the Development of Industrial Technology (CDTI) is a Public Business Entity, answering to the Ministry of Economy, Industry and Competitiveness, which fosters the technological development and innovation of Spanish companies. It is the entity that channels the funding and support applications for national and international R&D&i projects of Spanish companies.

About the European Space Agency

The European Space Agency (ESA) provides Europe’s gateway to space. ESA is an intergovernmental organisation, created in 1975, with the mission to shape the development of Europe’s space capability and ensure that investment in space delivers benefits to the citizens of Europe and the world.

By coordinating the financial and intellectual resources of its members, ESA can undertake programmes and activities far beyond the scope of any single European country. It is working in particular with the EU on implementing the Galileo and Copernicus programmes as well as with EUMETSAT for the development of meteorological missions. ESA develops the launchers, spacecraft and ground facilities needed to keep Europe at the forefront of global space activities. Today, it develops and launches satellites for Earth observation, navigation, telecommunications and astronomy, sends probes to the far reaches of the Solar System and cooperates in the human exploration of space. ESA also has a strong applications programme developing services in the Earth observation, navigation and telecommunications domain.

ESA’s Advanced Research in Telecommunications Systems (ARTES) programme transforms research and development investment into successful commercial products. It helps to secure the futures of Europe and Canada in the worldwide satcom market.

Learn more about ESA at www.esa.int