This is the first mission of the new SmallGEO platform, which was developed by OHB System AG (Germany) together with the European Space Agency and HISPASAT. 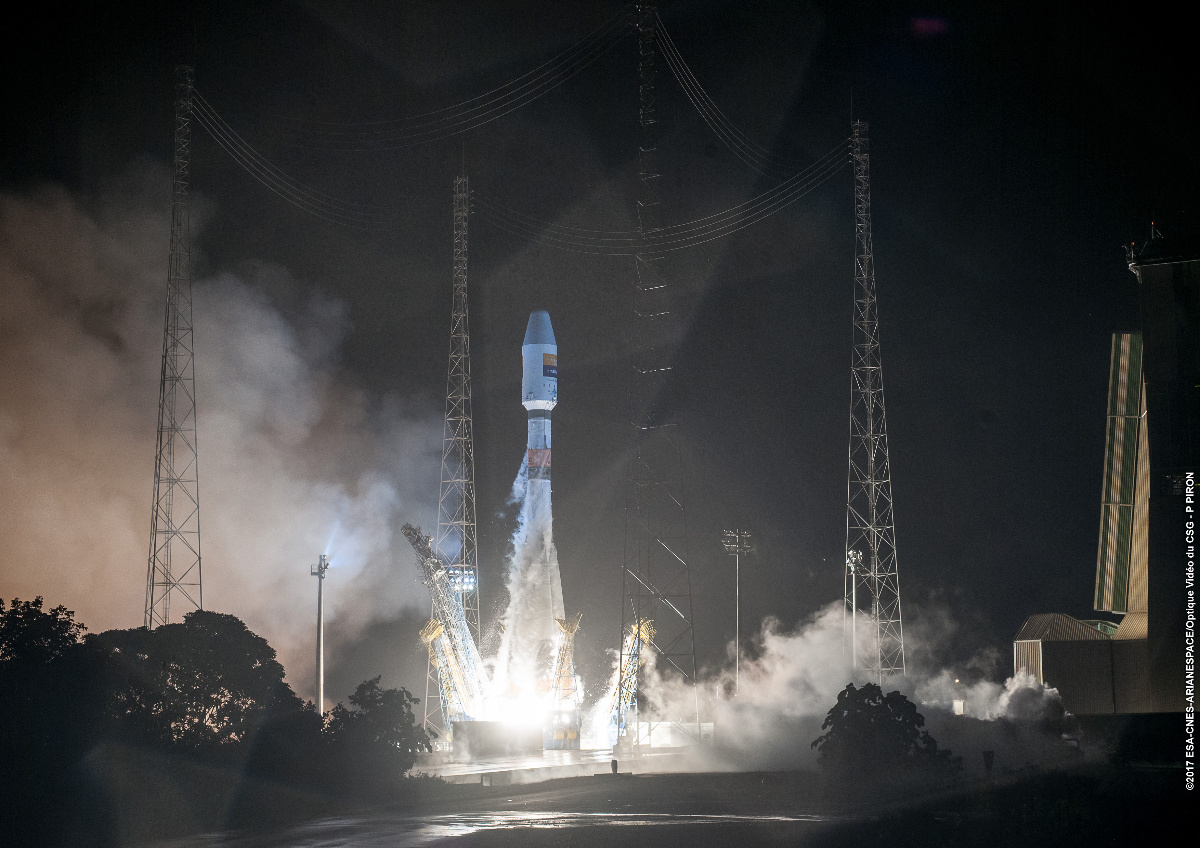 Madrid, 28 January 2017. At 2:03 AM Spanish time, Hispasat successfully launched its tenth satellite, the Hispasat 36W-1 (H36W-1), from the European Spaceport of Kourou in French Guiana, aboard Arianespace’s Soyuz launch vehicle.

Approximately 32 minutes after the rocket took off, the H36W-1 satellite separated from the launch vehicle, at which point the solar panels were started up and deployed. From that moment on, manoeuvres began to position the new satellite at the geostationary orbit point where the test phase will be carried out to make sure it is working properly, and which is scheduled to last several weeks.

Carlos Espinós, the satellite operator’s CEO, stated that “this new satellite is an important step in Hispasat’s innovation strategy. Hispasat 36W-1 is not only the first mission of the new SmallGEO platform, but also incorporates an advanced regenerative payload that will provide the satellite with greater flexibility and signal quality thanks to its reconfigurable antenna and on-board processor, thus improving the telecommunications services it will provide to its clients. We are very satisfied with our collaboration with the European Space Agency (ESA), which has allowed us to participate in a leading technological project to which they have added significant value with their knowledge and experience in the space sector.”

The new satellite will provide coverage for South America and Europe, including the Canary Islands. It has a 15-year lifespan and will offer video contribution and cellular backhaul services, as well as company and broadband solutions. It is fitted with 20 transponders on the Ku band and additional capacity of up to 3 transponders on the Ka band, and has a launch mass of 3,200 kg.

The H36W-1satellite was built by the German company OHB System AG and is the first mission of the SmallGEO platform, developed by the German manufacturer together with the European Space Agency and HISPASAT. This platform allows for a substantial reduction in satellite mass thanks to the use of electric propulsion throughout the lifespan of the satellite.

In addition, the H36W-1 incorporates RedSAT, an advanced regenerative payload consisting of a novel active antenna with reconfigurable beams that, together with the on-board processor, will improve the efficiency and services offered by the satellite. The antenna can be controlled electronically from the Earth and reoriented at any point during the lifespan of the satellite, granting it the flexibility to adapt its coverage to mission changes that may occur after launch, while still in orbit.

The on-board processor is a further step in the evolution of satellites, which can greatly simplify network architecture by performing in space a part of the processing usually carried out on Earth. It can simultaneously process up to four 36 MHz transponders, correcting possible signal degradations and transmitting them without errors, leading to a more robust and higher quality communications system that enables signal reception with small-diameter antennas.

Investment in the project has amounted to more than 240 million euros, and it has received funding from the CDTI as well as significant involvement from the Spanish industrial sector: