Both companies have agreed to market the Ka-band capacity of the Hispasat 36W-1 and Hispasat 30W-6 satellites to bridge the digital divide in areas underserved by terrestrial telecommunications networks.

The agreement coincides with the announcement of the Secretariat of State for the Information Society and the Digital Agenda to offer subsidies of up to 400 euros for the procurement of fixed broadband services at 30 Mbps.

Eurona thus becomes the operator with the greatest satellite capacity in Europe, and it was the first accredited operator to qualify for this aid. 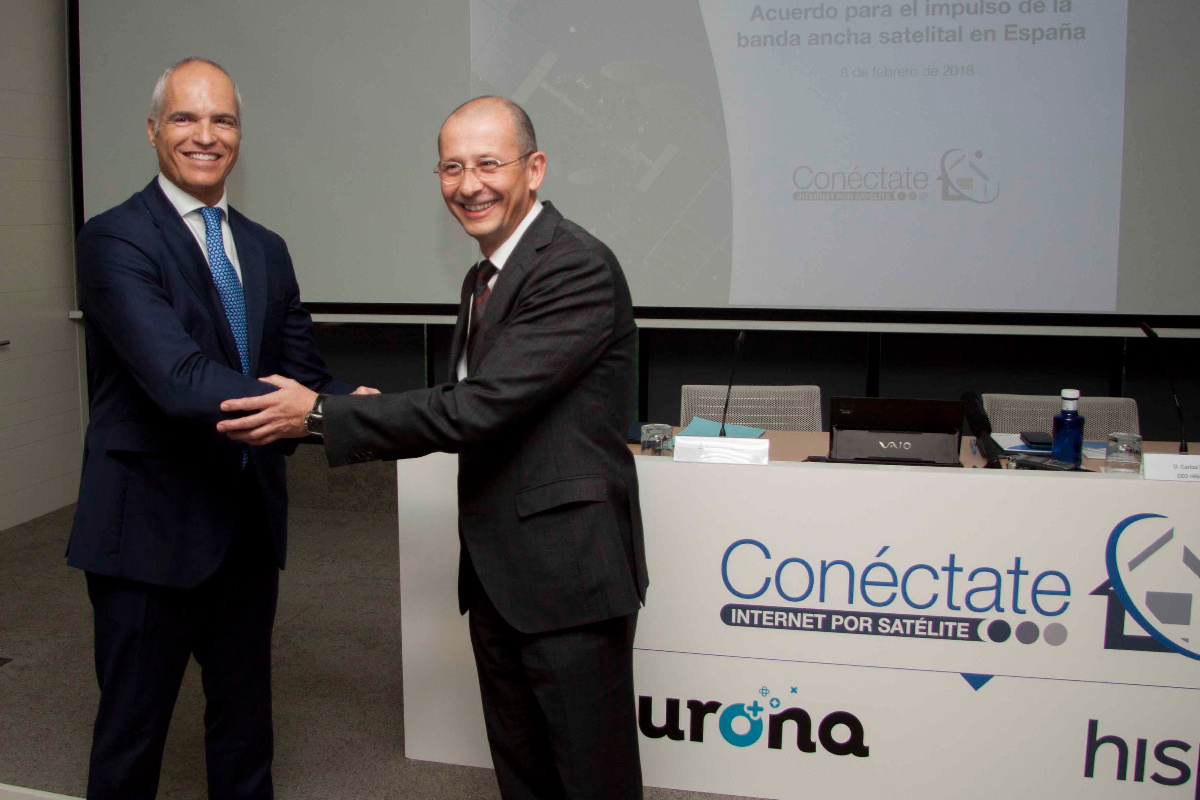 MADRID, 8 February 2018. Hispasat, the Spanish satellite communications operator, and Eurona, operator and leading provider of Internet, voice, data and satellite television services, have strengthened their partnership to help bridge the digital divide in Spain through the use of broadband connectivity via satellite.

In a press conference held today in Madrid, the CEOs of both companies, Carlos Espinós and Fernando Ojeda, announced an agreement to market the Ka-band capacity of the Hispasat 36W-1 and Hispasat 30W-6 satellites, which will be launched into space this month from Cape Canaveral on board a SpaceX Falcon 9 launch vehicle. Both satellites have Ka-band beams over Spain, Europe and North Africa.

Under this agreement, Eurona becomes the operator with the greatest satellite capacity in Europe, which will be key to ensuring equal access to the Internet. Although Spain leads the deployment of optical fibre in Europe and broadband coverage is very widespread, there are still towns, mainly in rural or sparsely populated areas or areas of complex mountain terrain, which lack or have very slow Internet access. The agreement signed by Hispasat and Eurona aims to offer people who live in these areas a technological solution via satellite that can be accredited in terms of quality and price as compared to other terrestrial technologies.

The Ka-band, key to satellite connectivity

Thanks to the use of the Ka band, which has greater capacity, and the possibility of reusing frequencies, the H36W-1 and H30W-6 satellites have stronger coverage over smaller areas, which improves the efficiency of satellite transmissions and makes it possible to reach speeds of up to 30 Mbps under conditions similar to those of other technologies. “All of this entails a direct increase in information that can be transmitted, faster speeds and obtaining more competitive rates for the end customers”, explained Carlos Espinós, CEO of Hispasat. Thus, Hispasat and Eurona can bring high-quality Internet access to more than 30,000 homes anywhere in Spain and to areas of Morocco with the highest demand.

“This improved performance, together with the universal coverage provided by the satellite at any point under its range, regardless of distances or difficulties in the terrain, and the quick deployment of the service, given that it has an antenna to be able to connect immediately, make the satellite the ideal solution for the areas underserved by terrestrial networks”, concluded Espinós.

This agreement will come into effect when Eurona introduces its offering of broadband services via satellite at 30 Mbps throughout all of Spain for prices starting at 39.90 euros per month, which can include landline and mobile phone services. Furthermore, this includes the services recently provided by the technological operator with Hughes (leader in satellite technology) and Fenitel, Federation of Installers, to speed up the deployment of satellite broadband services in areas with a digital divide.

According to the CEO of Eurona, Fernando Ojeda, “Eurona and Hispasat have established a strategic alliance with a long track record that also allows Eurona to boost its growth, positioning itself as a leader of satellite capacity in Europe, as this allows both companies to operate at a Ka-band capacity higher than 2.2GHz in Spain and Morocco. With this agreement, we hope to change the rules of the game by ensuring equal access to the Internet and guaranteeing the right of people to be connected regardless of where they are and where others do not go. At Eurona, we measure ourselves in terms of thousands of connected lives, rather than millions of users. Since we are listed on the stock market, we think not only of economic profitability, but also social well-being”.

Aid for the end user

The agreement reached by Hispasat and Eurona coincides with the announcement made recently by the Secretariat of State for the Information Society and the Digital Agenda regarding the implementation of the Aid Programme for the procurement of fixed broadband at 30 Mbps.

Thus, people or organisations in towns with less than 5,000 inhabitants which do not have fixed broadband services with a download speed of more than 10 megabits per second may receive up to 400 euros to cover the expenses arising from the activation of the fixed broadband service at a minimum speed of 30 Mbps, such as the purchase of the equipment, its installation and its operation. Eurona was the first accredited operator to qualify for this broadband Subsidy Scheme.

With the aim to promote satellite broadband Internet access for all citizens, Hispasat and Eurona are going to launch the information campaign Conéctate por Satélite (Get Connected by Satellite). Both companies seek to give greater visibility to satellite technology and help the end user apply for this this state aid to the extent possible through talks and press conferences in areas with a greater demand for this type of connectivity solution, as well as through the website www.conectateporsatelite.es.

Eurona Wireless Telecom (EWT) is a Spanish multinational telecommunications company that offers new generation broadband access services and brings high speed Internet to areas where others do not go by using wireless and satellite technologies. The multinational, which has been listed on the Alternative Investment Market (AIM) since 2010, is present in more than 20 countries and has more than 40,000 customers.

HISPASAT is comprised of companies that have a presence in Spain as well as in Latin America, where its Brazilian affiliate HISPAMAR is based. HISPASAT is a world leader in the distribution and broadcasting of Spanish and Portuguese content, and its satellite fleet is used by important direct-to-home television (DTH) and high-definition television (HDTV) digital platforms. HISPASAT also provides satellite broadband services and other added value solutions to governments, corporations and telecommunication operators in America, Europe and North Africa. HISPASAT is one of the world's largest companies in its sector in terms of revenue, and the main communications bridge between Europe and the Americas.