The Spanish satellite operator reached 228.9 million euros of revenue in 2016.

In this business year, HISPASAT has invested 167.8 million euros, which reaffirms its growth strategy.

The guaranteed long-term capacity contracts (back-log) stands at 6.5 times the company’s annual revenue, one of the best in the sector.

Madrid, 24 March 2017.- Spanish satellite communications operator HISPASAT reached in 228.9 million euros in total revenue in the 2016 business year, which is a 4.2% increase compared to the previous year.

Revenue from space capacity has also increased, having reached 225.5 million euros, 4.2% more than in 2015. By geographic area, 35.4% of the revenue from leasing Group space capacity came from Europe and Northern Africa, while 64.6% came from the North and South American market.

The investment amount was 167.8 million euros, spent mainly on ongoing satellite programs in 2016: the Hispasat 36W-1 satellite –successfully launched on 28 January-, the Amazonas 5 satellite and the Hispasat 30W-6 satellite– with launches planned for 2017-, as well as on innovation projects involving both satellites and products and services. This investment reaffirms the company’s commitment to continue working on its growth strategy and to deal with the challenges and opportunities present in the market.

The company obtained a consolidated operating profit of 99.9 million euros, 8.1% higher than the previous business year, due to lower amortization expenses. EBITDA reached 175.7 million euros, 1.8% less than that obtained in 2015, and the operating margin was at 76.7%, sustaining the high profitability of the company. This reduction is due to the impact of the extraordinary expenses derived from the contracting of a gap filler in order to advance the provision of services from the 36º West position, until the Hispasat 36W-1 satellite arrives at its position, and from the migration of services from current clients to new satellites. Excluding the effect of the extraordinary expenses, the EBITDA margin would be 81.2%.

The net profit, in compared terms, would be 79.1 million euros, 33.4% more than in 2015. The extraordinary expenses described and the adverse situation of HISDESAT –shared by the equity method which has been caused by market problems and the evolution of its investees– have negatively impacted the company’s results, its net profit finally being 25.1 million euros, 59.9% lower than that obtained in 2015.

The commercial efforts made have also led to the consolidation of significant backlog (guaranteed long-term satellite capacity contracts), which is at a figure equivalent to 6.5 times the company’s annual revenue at the end of the financial year, which amounts to 1,485 million euros, one of the best in the sector.

For Elena Pisonero, president of HISPASAT, “2016 was a very intense year in which the company faced several challenges and unexpected situations but, even so, we were able to overcome them positively and keep growing our revenue. Despite the complicated situation in the satellite market, HISPASAT continues to be one of the most profitable and efficient operators in the sector. We continue to work on our strategic growth path as we focus on developing our satellite projects, which will become a reality in 2017, applying innovation in the search for new solutions and products, and offering the best telecommunication services to our clients.”


HISPASAT GROUP - EVOLUTION OF KEY DATA (in millions of euros) 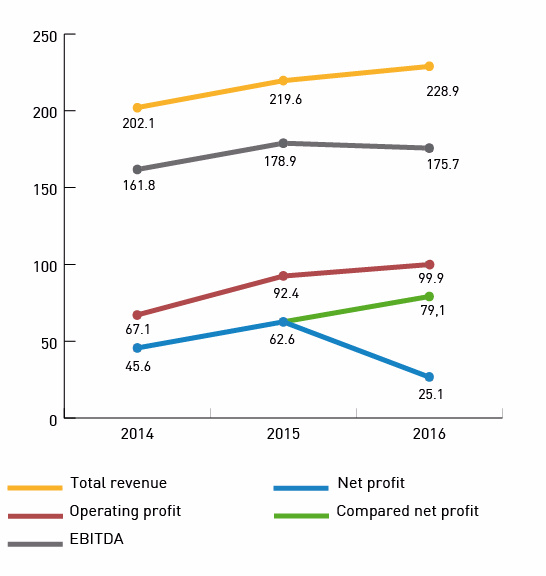